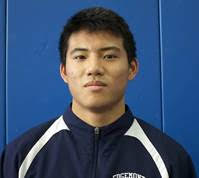 Athlete of the Week: Cliffton Wang

Cliffton is a junior wrestling at 182 lbs.  This past week Cliffton was a dominating 8-1, including 6 pins and 1 technical fall.  At the Center Moriches Tournament on Long Island, Cliff competed 8 times in two days against some of the toughest competition in New York State, where he went 7-1.  Cliffton was also voted our team’s Most Outstanding Wrestler by the tournament’s coaches and also achieved his 100th career victory by way of pin.  Cliffton improved to 20-2 on the season. He stands at 102 career wins and is a two-time Section 1 Champion, finishing in the Top 8 in NYS last year.