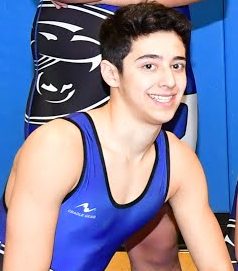 Athlete of the Week – Zeke Cohen

Zeke is a senior wrestling at 145 lbs. After being out with a minor concussion for about two weeks, Zeke completed the Return to Play Protocol and was cleared to compete the day before Sectionals, giving him virtually no time to prepare for the final tournament of his high school career.  Zeke was the 11th seed in his weight class one of the deepest in the Section, having never placed in sectionals before.  Zeke started off by upsetting the #6 seed from Hastings, winning by pin.  He then ran into the #2 seed, Hector Monroy from Ardsley, who dominated the match and won by pin.  Undeterred, Zeke wrestled back to upset #9 Zach Chapins from Westlake by pin and then #6 Jake Dominello from Croton by tech fall 17-2.  Dominello beat Zeke twice earlier in the season, both times by pin.  Finally, Zeke ended up in the 5th place bout in a rematch against #2 Hector Monroy.
This time the result was different Zeke won a hard-fought battle 8-4 to upset the #2 seed and take 5th in the Section despite his recent concussion and his 11th seed.