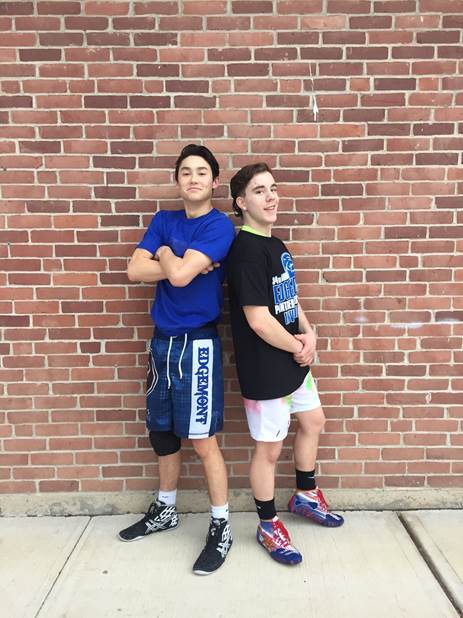 George is a junior at 126 lbs. Yesterday at the 19-team Edgemont Tournament (one of the largest tournaments in Section 1), George dominated his entire weight class, not only winning the tournament but gaining valuable bonus points for the team in EVERY SINGLE match he wrestled. He finished the day with 2 pins and a major decision, which included a tremendous 3rd period pin in the Championship Finals, as he upset #1-seed, Stepinac’s Adrian Hyman-Martin.

This is not only George’s first career Edgemont Tournament Title but also his first career championship in any varsity tournament. George’s performance was instrumental in our 2nd place team finish at the tournament – even more impressive considering we only entered 11 wrestlers (out of the 17 the rules allowed).

Earlier in the week George made quick work of Joseph Montalvo of Hastings with a 34-second pin to help lift Edgemont to an undefeated League Championship.

Kyle Aslanian
Kyle is a senior and a team captain. Yesterday, Kyle capped off his career with his first-ever Edgemont Tournament title. He dominated the 132 pound weight class with a first-period pin of rival Scarsdale’s Elliot Greene, a 15-0 technical fall of Rye’s Phil Smith and a thrilling ride-out victory in the finals over Stepinac’s Louis Waddell.

Earlier in the week Kyle was a perfect 2-0 in dual meet competition, including a 30-second pin of Hastings’ Jakob Cantor to help lift Edgemont to an undefeated League Championship.

Earlier this season, Kyle achieved his 100th career victory, becoming only the 8th Edgemont wrestler EVER reach this mark. Kyle is a 2014 Section 1 Champion and was All-State in 2014 as well.